September, 2018, saw Priyank Gothwal join WAA for residency he was awarded through the Inlaks India Foundation. As a photographer and filmmaker, he was interested in filming in some of the old mills of the city as he had a project in mind.

As it was proving to be difficult to get access to the old mill compounds to film, Priyank changed his project and decided to turn his bedroom in the apartment into a studio where he spent 15 days, 12 hours a day, filming a cactus plant which later turned into a mixed media installation. He was inspired by a book about boredom and chose to consciously situate himself in a space where he was forced to be bored juxtaposing himself  with the slow growth of the cactus plant. During this filming, Priyank explored ideas of the passing of time, temporality and what happens in an artists’ subconscious while working on long durational projects. Priyank created beautiful graphite and charcoal drawings as a result of this time consuming process which he also displayed in his studio.

During his residency, he had studio visits with filmmaker Avijit Mukul Kishore and artist Meera Devidayal along with interactions with the other artists at the residency which then culminated in an informal open studio. 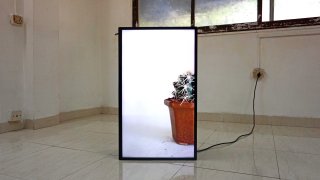 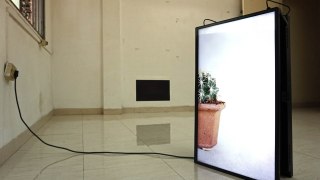 WAA Residency was launched in 2013 with the aim to facilitate and support art practice. One of the few art residencies in Mumbai, India, the residency provides individual studio space, professional networking opportunities and an intellectually stimulating environment for dialogue on visual arts practices for artists and curators. In addition, the residency regularly organises artist talks and open studios. The residency is situated in the heart of Mumbai in Bandra, a vibrant neighbourhood, not far from the art district where galleries, museums and art spaces are located. 9 spacious studios situated in a quiet lane above the WAA office and project space.